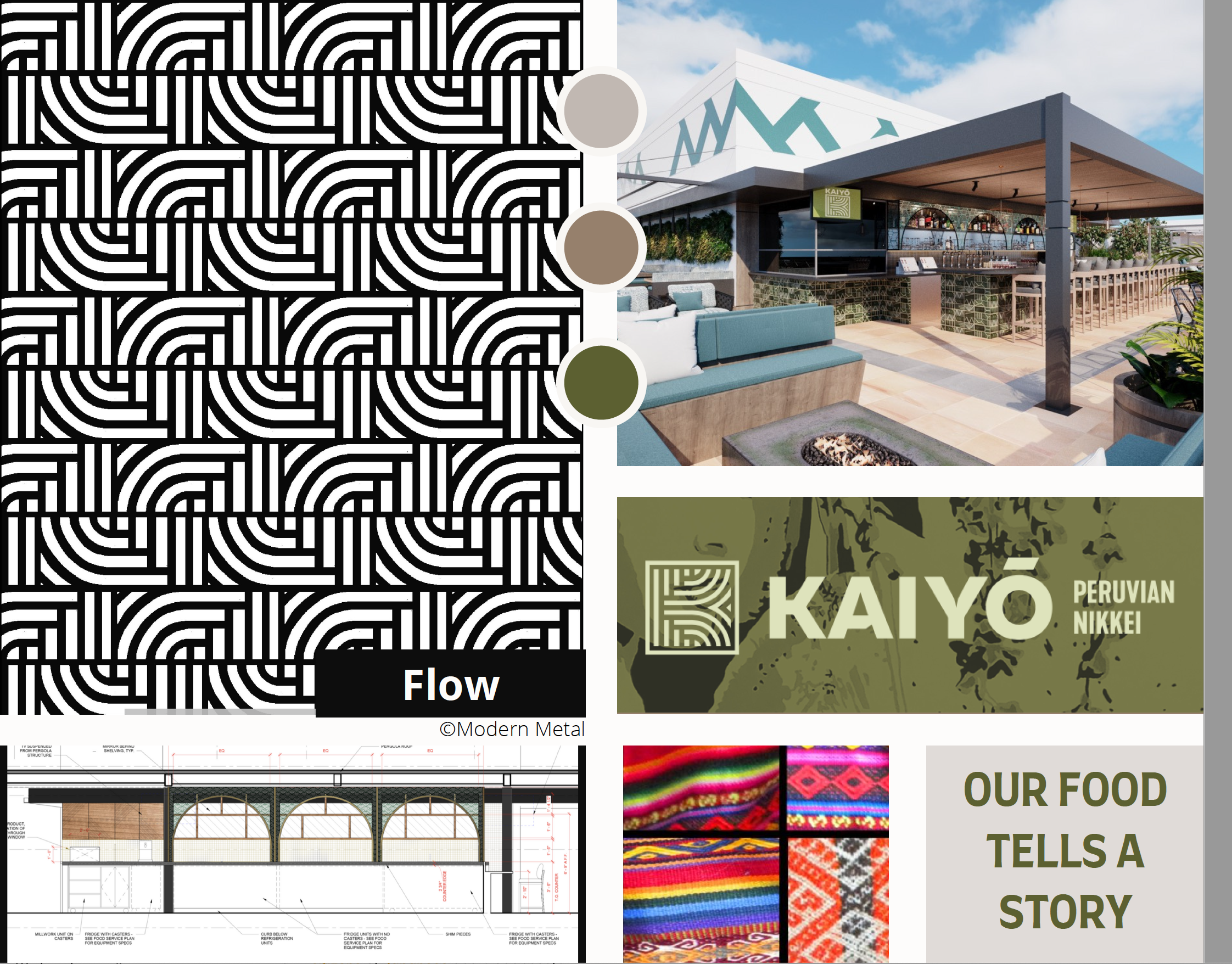 Kaiyo Rooftop was a particularly meaningful project because we had been planning this project pre-covid , when suddenly the pandemic halted and cancelled it all. I was so disappointed at the time, as it was such an exciting local project. It simply stopped as so many other restaurant and design endeavors did that March a couple of years ago.

Flash forward to August 2021, I got a call from John Park, who introduced himself to me as the owner of Kaiyo Rooftop and wanted to revisit the panels.  My jaw dropped.  I truly thought this project was dead, and this call brought it back to life.  YAY!

Usually I work directly with the designers and architects, but for this I was working directly with John and the contractor Michael Schoenig. John really impressed me with his professionalism, his attention to detail and his business savvy.

He shared all of the current plans drafted by William Duff Architecture, as well as the overall vibe of the restaurant.  He explained the meaning behind his restaurant to me, and the desire to have this pattern further enhance the Peruvian-Asian cuisine. John came to me with a fish scale pattern from a Japanese block print. Although simple and traditional, I thought Modern Metal could do better!

My creative juices started doing their thing.  I asked him a lot of questions.  I researched the history of Nikkei, the Peruvians that have Japanese ancestry.  I knew nothing about this part of history and was fascinated.  Some fun facts from Wikipedia:

“Peru was the first Latin American country to establish diplomatic relations with Japan,[8] in June 1873.[9] Peru was also the first Latin American country to accept Japanese immigration.[8] The Sakura Maru carried Japanese families from Yokohama to Peru and arrived on April 3, 1899, at the Peruvian port city of Callao.[10] This group of 790 Japanese became the first of several waves of emigrants who made new lives for themselves in Peru, some nine years before emigration to Brazil began.[9]

Most immigrants arrived from Okinawa, Gifu, Hiroshima, Kanagawa and Osaka prefectures. Many arrived as farmers or to work in the fields but, after their contracts were completed, settled in the cities.[11] In the period before World War II, the Japanese community in Peru was largely run by issei immigrants born in Japan.”

John told me about their custom designed logo, which was was all about ocean waves, reflecting seafood and their cuisine.  I suggested developing a pattern working with their logo.   It had flow, and potential to shine in a repeating pattern. John loved that idea.  So, I went to work.  We presented John with 4 story boards, all inspired by Peruvian textiles, Japanese imagery and his fabulous logo.  They were titled. Block, Flow, and Fusion,  I wanted the patterns to tell a story just as his food does.

John selected our pattern Flow, and indeed it captures this story. The design itself is a fusion of smooth flowing lines and graphic pattern, symbolizing waves of culture running together over time. We refined the scale, the technical details for laser cutting these, and consulted with structural specialists to make sure these would be sound as arches in the given space.  It was another success in team work.  The designers at William Duff selected the exterior grade color from Tiger Drylac, and finalized all material decisions.  What a relief to work with such professionals across the board.

A fusion of success indeed! Incredible teamwork between owner, contractor, architect, designer and Modern Metal.   I look forward to having many drinks with all of these fabulous colleagues at Kaiyo Rooftop.