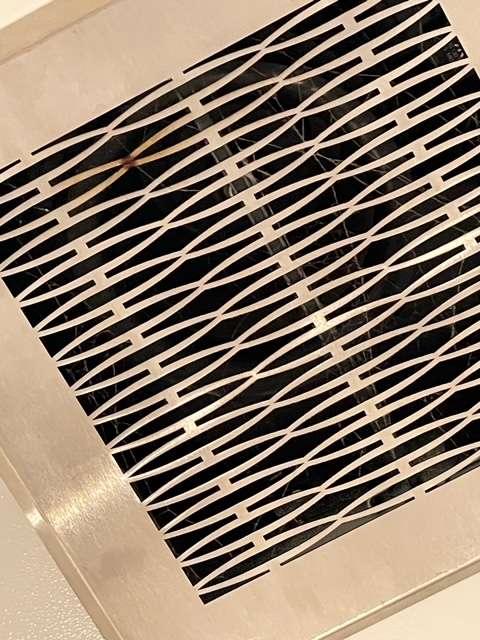 I recently completed an order that I am proud to share with you because the outcome was better than I could have ever wanted.  This was a repeat customer who submitted an order for six new bathroom fan covers in stainless steel.  We immediately hopped into gear, got drawings, and completed the order in less than two weeks!  He said he wanted them fast, and our fabricator was able to pull through for us in a heroic way.

A couple of days later, the contractor sent me this picture showing a rust spot on the surface. We’ve  honestly never seen this happen before!  I’m learning there’s a first time for everything in this business….  I immediately asked the fabricator what that could be, and he immediately responded to me, and was perplexed as well.  It seemed to be rust.  Could it be from heat?  Could it be some sort of cross contamination?  There is carbon in stainless and sometimes there are tiny spots, but he had never seen any rust.  That’s the beauty of stainless steel, it inherently does not rust as uncoated steel does, which is why it’s an ideal metal choice for wet environments and exterior applications.

If the fabricator re-grained them which is often done to eliminate surface scratches, they could have used a graining belt that was also used on standard steel so there could have beeen some cross contamination.  Cross contamination would be an easy fix if that were the case.  They were passivated, so they should not have have rusted.  Passivation is a process, “a method of improving the corrosion resistance of stainless steel parts by removing ferrous contaminants like free iron from their surface, restoring them to their original corrosion specifications.”

Regardless of the cause, we were getting a new piece made at lightening speed.  The fabricator made a new one and hand delivered to the job site within 24 hours! All done? Not quite….

We soon discovered that six fan covers were initially ordered yet somehow only three got made. Yikes again! The fabricator took full responsibility for this clerical error too, and made another three in 24 hours.

I really respect our fabricator who not only went into action to make this right for me and for my customer, but cared.  He cared a lot, and his efforts showed in the end result. These are absolutely stunning pieces and were beautifully installed.  In the end, our client was so happy he thanked me by saying “I wish all of our vendors were this fast and responsive”.   I passed on his kind words to our fabricator, who was appreciative.  The customer’s kindness and understanding throughout was refreshing and admirable.  In the end, we solved the problems, but most importantly I think we all came out with mutual professional respect for each other.